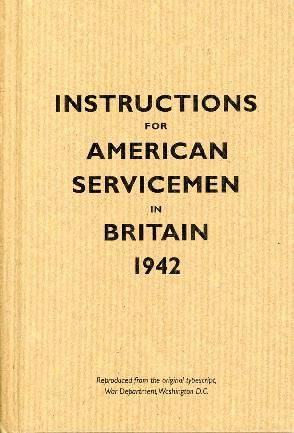 When American servicemen were sent over in 1942 to help with the war against the Nazis, they were issued with guidelines on how to behave and what to expect when they came to the UK. This booklet, here reproduced in hard back, is reproduced from the original typescript by the War Department, Washington DC. The purpose of the guide "... is to start getting you acquainted with the British, their country, and their ways." Headings in the booklet are:-

No time to fight old wars
British reserved, not unfriendly
Don't be a show off
The British are tough
Age instead of size
Remember there's a war on
Britain the cradle of democracy
The people - their customs and manners
The British like sports
Indoor amusements
Keep out of arguments
Britain at war - the British came through
Waste means lives
British Women at war
Some hints on British words
Weights and measures
Important Do's and Don'ts
Table of currency
It is always impolite to criticise your hosts; it is militarily stupid to criticise your allies

Brian Woodward told me "The Yanks was good to us at The Signals Camp. Wanted to play darts in the pubs and always insisted on buying the beer as they had more money. Invited once a month to their Jazz club on the base and paid for everything. Invited to a concert which was held in a hanger by the then Air Force Of Note band which was the follow on from Glen Miller band. Concert due to finish at 11pm they would not let the band leave the stage and it ended at 1am. What a night. They also liked the Buckland dances as well, but that's another story.

"If I remember right the Buckland Dances was on a Monday or Wednesday. A coach from Witney carrying mainly girls from Smiths Industries picked us up at the town square about 7 o' clock. First we visited The Lamb in Buckland for lubrication and then on to the village hall. T he dances was well attended and when the Yanks found out they attended. One night a fight broke out between the Yanks and some Farringdon lads and the American Snowdrops (Military Police) was soon there to sort it out with their long batons. One shilling and sixpence, 7.1/2 pence today and a beer or two for a great night out dancing to a trio with a partner that you held and could talk to.

"We also had Camp Dances about every 3 months that was well attended. I remember John "Tazz" Winn finding Sergeant - Major Fred O Conner's wallet on the floor and Fred wanted to buy Tazz a drink. Tazz never drank, but to be sociable he asked for a Port and Lemon. 'I wont buy one of my soldiers that' so Tazz asked for a Babycham. Fred gave up. Great days."