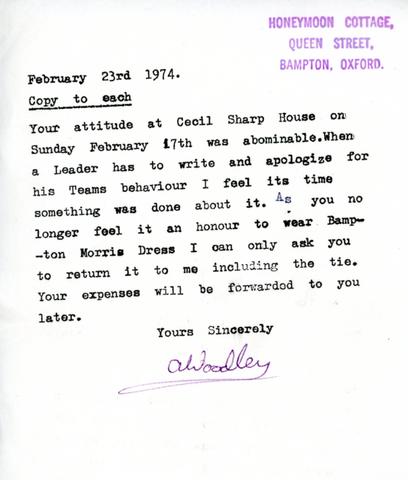 "I was one of those who received Arnold's 'copy to each' letter. We had been to dance at The Albert Hall. Friday night, Saturday matinee and Saturday night performances, followed by an all-night session in the hotel. On Sunday we went to 'The Favourite' an Irish pub in Camden Town where Reg Hall played the piano for the likes of Jimmy Power. Arnold announced that we had been invited by EFDSS to dance at a tea dance at Cecil Sharp House. Arnold considered this a great honour but we didn't, so didn't wear our beer-stained whites. So he sacked us all."

"As I recall I was the only dancer that didn’t get the letter. We were at the Albert Hall when the incident took place. It was all over the guys going to the Irish pub and not getting back to dance in full kit when we were supposed to be on stage. I was too young to go out with them or I may have also been asked to return my tie. It was over 40 years ago and people had different views in those days. RIP Arnold he taught so many of us to dance."