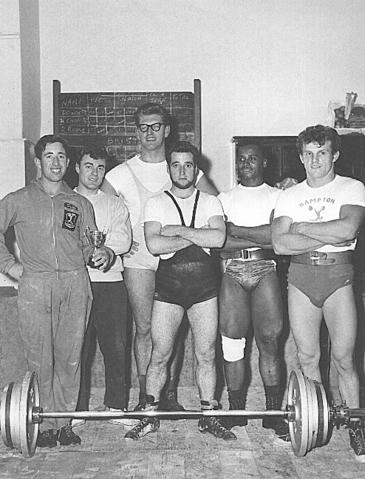 pdf of 4 pictures and one document

The Bampton Weightlifting Club began in the 1950s and in the first few decades, it was all about Olympic style lifting. The club is still going very strongly but today people go to tone up rather than entering competitions.
Don Rouse explains
"Always after these big events the Bampton Weightlifting club would hold a Dance to entertain the visitors. There was a big selection of top local Bands to choose from. A local agency called BF Promotions which Michael Bantin from Aston and Fred Fowler from Lew were the Directors had a whole list of great Bands charging as much as £60.00 for a night!!
I’m having trouble remembering some of the Bands . I know Ali and the Condors was one but there was a more local group that was fantastic , can anyone help?
The maximum number in the WI Hall was 120 but the rules said a minimum of 5 Stewards was required. So being just a little bit naughty we would get 140 in there by naming 20 of the lifters as Stewards!!
Well let’s face it, with Dave Prowse the British Heavyweight Champion who stood 6’7” tall and our strongest man Nigel Chivers in attendance we were not going to get any problems were we. ?
Any memories of these great occasions out there?

In 2007 we filmed a conversation with Don who gave a wonderful history of the Weightlifting Club. https://www.youtube.com/watch?v=MrM65XQXyBE

BADC14 Hilda Pickard and her husband Sid on the left with Precious McKenzie, shaking Hilda's hand and Don Rouse the founder of the weightlifting club.