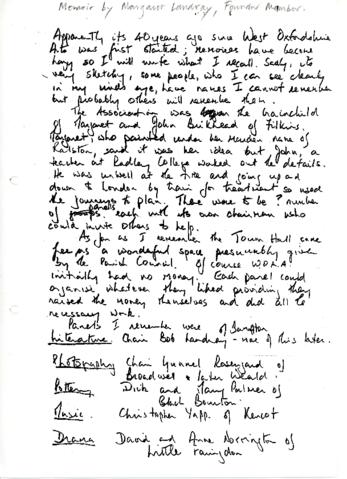 In 2013, Margaret Landray who was a founder member of West Oxfordshire Arts Association, WOAA, which later became known as West Ox Arts, wrote her memoir of the Arts Association and this is her hand-written account. The association was the brainchild of John and Margaret Birkhead of Filkins. Margaret painted under her maiden name of Ralston.
There were individual panels for
Literature
Photography
Pottery
Music
Drama
Painting
Crafts
There is much more detail in Margaret's account.

Sadly, John Birkead died in 1975 aged just 45 years. 1930-1975. He spent much time going up to London for treatment and used the time on the train to work out how they could form and run an Arts Association. Included here is a fitting obituary for John written by Charlie Mussett, another founder member.