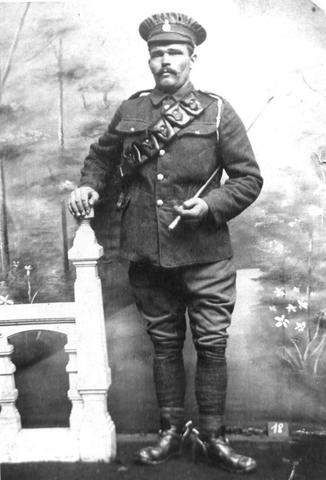 A soldier in WWI uniform

This photograph was lent to the Archive in 2003 and no notes were put with it. I contacted the National Army Museum to see what they could tell me about it and this is their reply.

"The uniform in the image you have sent through is post 1915 in design as it does not have the pleated pockets used in earlier or post 1918 issues of Service Dress uniform. However, there is very little else that I can identify for certain on this image as photographic studios were known to hold 'props' such as bandoliers and swagger sticks (both seen in this image) which they would use in photographs irrespective of whether the individual was entitled to them. I cannot see any rank insignia on the uniform at all although if the swagger stick is not a prop it would suggest the individual is a senior NCO or an officer. The bandolier, if not a prop, suggests either Royal Artillery or Army Service Corps. Although the cap badge cannot be seen in discernible detail it is the right shape for the Army Service Corps, but there are a number of different regiments which use this shape so it is not possible to be certain of the regiment the individual belonged to in this case. "