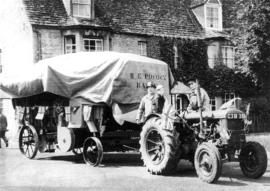 Harry Pocock with his thrashing machine and tractor in 1958

Harry Pocock with his thrashing machine and tractor in 1958 driving out of Church Street into Broad Street. Edwin, Ruth and Joe Buckingham are on the tractor with him.

Seen in the spring of 1963, talking with Marjorie Pollard in Cheapside, when we had huge drifts of snow.