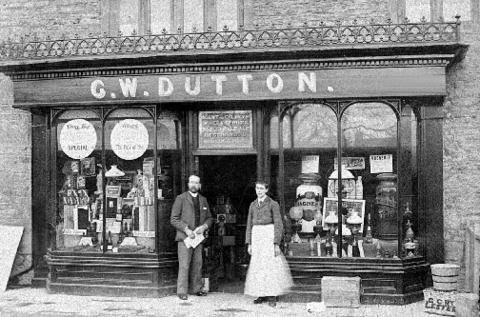 Dutton the grocery shop also contained a bank and when the bank became Midland Bank and moved to a property next-door-but one, George moved out of the shop to run the bank full time and sold the grocery business to Bill Mathews. In the photograph of Duttons, you can see George and a young 15 year old Bill Mathews who was a trainee at the shop at the time.

After Bill bought the shop and married, he had a son born at the shop known to all locals as Billy, who in 2019 is 90 years old.

Th lady in her nurse's uniform is the grandmother of Bill Mathews junior.

Midland Bank later became HSBC and when that close, the butcher in the neighbouring premises, Patrick Strainge, enlarged his shop and made the space that had been the bank into a lovely delicatessen to add to his butchery business. Patrick Strainge has Q rating which is a wonderful achievement because only 200 can be given this status in the whole country at any one time.