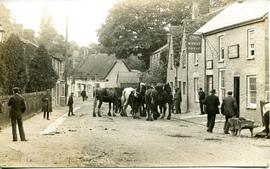 This is a photograph of the Horse Fair taken outside the Wheat Sheaf Inn in Bridge Street. Note the man collecting the horse manure off the road which was prized in all vegetable gardens. Young boys used to collect it up and sell it for a few pe...

The Wheat Sheaf and papershop next door, Bridge Street

This is a photograph of the Wheat Sheaf which ceased to be a pub in 1972 when it became a post office. Early in the C20th an elderly lady used to cook fish to order in large open skillets like a giant wok and you went in via the door next to the ...