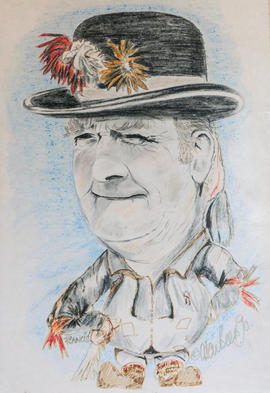 This delightful drawing of Francis Shergold by Alan Beers is dated 1990. Francis was squire of the Bampton Traditional Morris Men 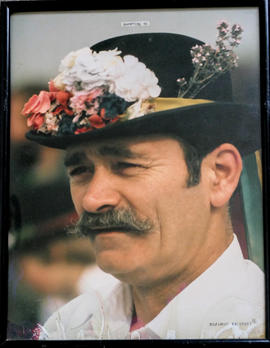 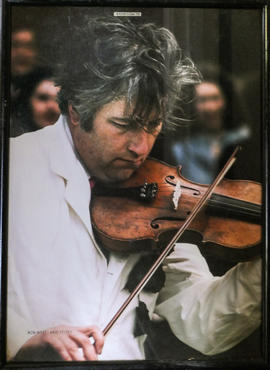 A photograph of Reg Hall playing the fiddle in 1970

A newspaper cutting about the Easter Bonnet competition held in Bampton in the forecourt of the Jubilee Inn. The judges were Jean Judge from Radio Oxford and Don Bradbury of the Horse Shoe. Debra Bradbury won first prize. The Pumpkin Club organised the competition. Ruth Wheeler won the adult section.

Over the Bank Holiday weekend at Whitsun 1985. Ian Baker and Ivan Lomas won the fancy dress competition held prior to the Shirt Race. Reg Hall enjoyed a pint between playing on the Monday. Terry Rouse danced in as the fool outside the Horse Shoe. 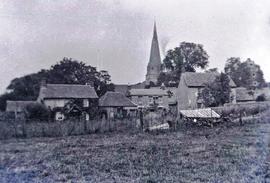 This article is about the AGM of the Bampton with Clanfield and Aston, Lew and Shifford church AGM. The vicar was Rev. Andrew Scott and this was his first year here. Alan Keef was elected secretary. Hilda Pickard was electoral roll keeper, Tim Bryce was treasurer and reported a 40% increase in parish share. A report of the diocesan synod was given by Ruby Riches and of the Mothers' Union by Mrs Betty Cooper.
Churchwardens elected were
Aston - Mr P Hook and Mr A Keef
Bampton - Mrs Hilda Pickard and Mr Norman Gregory
Clanfield - Mr P Horne and Mr Fred Farmer
Lew - Mr Charles Radclyffe and Mrs Olive Gush
Shifford - Mrs Betty Cooper and Mr Tim Bryce. 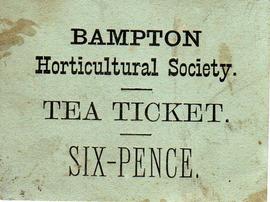