Carnival Films came to Bampton at least twice a year from 2010 to 2015 inclusive to film parts of Downton Abbey. After six years of Bampton being host to the filming of many of the outside scenes the production company hosted a farewell party for...

Program from the 2012 Donkey Derby

Each August Bank Holiday Monday the SPAJERS - Society for the Preservation of Ancient Junketing - organise a Donkey Derby and Fête in Sandfords Field. It is one of their major fundraising events which ultimately enables the Society to give everyo... 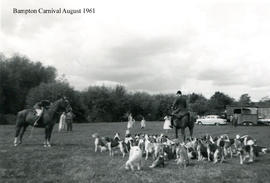 The hunt hounds being shown at Bampton Carnival 1961