Proposed well in the Market Square 1902

This is a fascinating read about the proposal for a well to be created in the Market Square - letters between the Squire Philip Southby of Bampton House, representing the wishes and comments of many of the local ratepayers who were against it. Y...

Daniel Gibbard was one of Bampton's blacksmiths and this photograph was taken in 1904. The church parish almanac for 1904 can be seen very clearly on the wall behind him. The items on the mantle shelf, on his table and his long stemmed pipe...

The War Memorial in the Market Square

The War Memorial in the Market Square has names on from the WWI, WWII and Afghanistan. These photographs take you around the memorial so that you can see every name on it. It also shows the newly added name in 2009 of Jason Mackie (Afghanistan) ...

Morris dancing outside The Lamb in the Market Square Whitsun 1939

This photograph was taken at Whitsun 1939 and shows the Morris dancers dancing outside The Lamb Inn in the Market Square. The inn was finally completely demolished in 1960 to make way for a garage showroom for Market Square Garage, which itself w...

In January 2013 Trish Cassidy wrote to Janet Rouse enclosing this scanned copy of a photograph of Bampton's Home Guard marching past The Talbot sometime during WWII and one of Rose Radband dressed as Britannia for a play. Her letter gives mo...

The Jubilee Inn, several years, in snow, during a Shirt Race and with landlord Reg Pratley

These are five photographs of the Jubilee Inn in the Market Square which is now (2017) a private dwelling. One picture shows Reg Pratley who was landlord there for several decades and a notice board by his door offering bed and breakfast, luncheo... 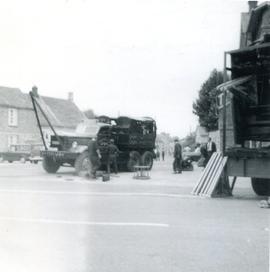 Starting to construct one of the rides at Bampton Fair held in the Market Square in August 1965. On these same days there used to be a very big horse fair and the fair was much larger spilling over going down the High Street to the turn into Bush...

Grant of occasional licence for The Eagle pub for the Bampton Traditional Morris Men's party in Nov. 1981

This is the licence granted to John Shuker licensee of The Eagle pub in Church View to be able to provide a bar at the Bampton Traditional Morris Men's party to be held in the W. I. Hall (in 2017 it is called the Village Hall) on November 9th...

A letter from Bill Govier, secretary of the Bampton Pumpkin Club, to Francis Shergold inviting the Bampton Traditional Morris Men to have a stall at the annual May Holiday Street Fair on May 3rd 1982

Adrian Simmonds had the general store on the west side of Market Square and was wonderfully placed to record the demolition of the Market Square Garage and the building of Thornberry Flats for the over 55s. These photographs record that history. ...

Old newspaper pictures of The Talbot and The Elephant & Castle

This newspaper cutting was found in a book in a second hand book shop. There is nothing to suggest the date but a fire destroyed the thatch on the Elephant & Castle about 1956 so it is earlier than that. It was given a slate roof when it was...

Winners of the Flower Garland

Winners of the Flower Garland -year and names not known but the Archive would be pleased to know these details. Do tell us quoting entry number 2017.559

This picture is taken in Market Square to show the Shirt Race. However, at this time there was no porch built on to the WI Hall (now the Village Hall), No4 Town House is still a shop and the arch nearest downstairs of the Town Hall is open. The ...