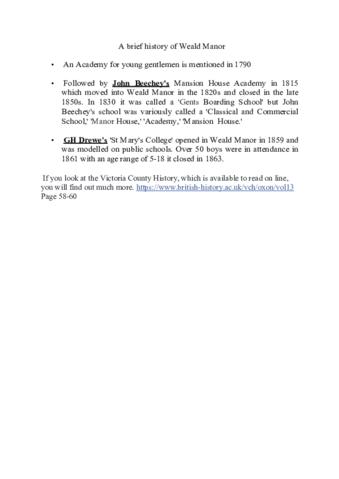 pdf of one page

A brief history of Weald Manor

• An Academy for young gentlemen is mentioned in 1790

• Followed by John Beechey's Mansion House Academy in 1815 which moved into Weald Manor in the 1820s and closed in the late 1850s. In 1830 it was called a 'Gents Boarding School' but John Beechey's school was variously called a 'Classical and Commercial School,' 'Manor House,' 'Academy,' 'Mansion House.'

If you look at the Victoria County History, which is available to read on line, you will find out much more.