Cromwell House is in Cheapside between Exeter House and The Old Forge. Hilda Kent lived there along with Margaret Howse after WWII until their deaths. Hilda did some research on the house and her notes are included in the pdf. They both worked ...

The blacksmiths Townsend and Wheeler at Cromwell House in Cheapside 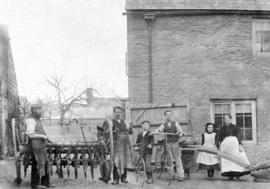 1. Seen with a horse and their families, the blacksmiths Townsend and Wheeler are outside their home, Cromwell House in Cheapside. The door to the right of the bay window has since been removed and the wall filled in.2. The blacksmith Mr Cripps...

Hilda came to live in Bampton soon after WWII and played a very active part in so many areas of Bampton life. She taught very many people to drive and after she retired and the Bush Club started, Hilda created a wonderful display on a myriad of s...

Obituary for Hilda Kent at her funeral in St Mary's

This is an eclectic mix of items about Hilda Kent & Margaret Howse. There is an item from The Beam about both ladies, a photograph taken July 7th 1919 of Ellie Kent, Hilda's aunt and Hilda's funeral address in 2012 given by Rev. Dav...

Obituary from The Beam, July 2012, for Hilda Kent

An article from the July 2012 issue of The Beam. An obituary Hilda Kent. Hilda came to Bampton with a friend, Margaret Howse after WWII where Hilda was in charge of the Land Army girls in Witney. After the war Hilda drove a bus and Margaret was...

This is the life story of Heidi, a beautiful German Shepherd dog who eventually was lucky enough to find a home with Hilda Kent and Margaret Howse in Cromwell House, Cheapside. Heidi had a very inauspicious start to her life but it finally ended ...

Hughes Garage was behind Cromwell House, the shop was on the corner next to it, now Exeter House and the petrol pumps for the garage were right in front of Cromwell House.

Cromwell House is in Cheapside. Next door to it used to Hughes Garage and shop. The garage was behind the shop and Cromwell House. The shop sold newspapers, knitting wools and patterns, sweets etc. The petrol pumps were right in front of Cromw...

Hilda Kent and Margaret Howse, friends since during WWII lived at Cromwell House

Margaret Howse and Hilda Kent became friends during WWII working for the Land Army in Witney and like many women, stayed friends and shared a home for the rest of their lives. They were great fund raisers for Macmillan Nurses and these pictures s...

Hilda Kent lived in Cromwell House, Cheapside, Bampton and researched as much as much as she could about its history and these are her notes