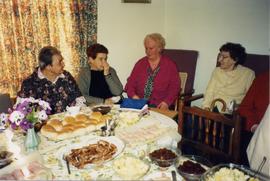 Tea at Lavender Place Flats 1997. Left to right:- Daisy Gill, Laura Turnham, Joan(or real name Beryl) Smith and one other lady.Sadly, the flats are to be pulled down and all the residents have been told to find somewhere else to live. At this mom...

On March 29th 1938 the Oxford Times reported that work has started on building Lavender Place flats and it is to cost £46,860. The builders are A E Hobley and Sons of North Leigh.

Garden bench given to Lavender Place Flats by the SPAJERS.

Lavender Place Flats off Bushey Row were opened in 1969. The SPAJERS (Society for The Preservation of Ancient Junketing) donated this garden bench for the use of the people who lived in the flats.Seated on the bench, back row L-R are Roger Peck, ...

These black and white photographs were taken on a miserably wet Whit Monday in 1985. There are pictures of Francis Shergold's side and Alec Wixey's. If anyone knows why Francis' side was dancing at Lavender Place flat in mufty I&#...

Lavender Place flats provide sheltered accommodation and are behind Home Farm house (on High Street) accessed from Bushey Row. These pictures were taken during one of their tea parties.

This photograph was taken in the car park of Lavender Place flats in Bampton. Ann and Francis Shergold with Nellie Brooks in the wheelchair and dancer Martin Landray.