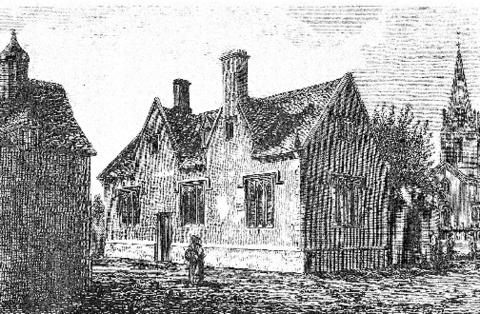 BAADF6 - The north side of the Grammar School in Church View built in 1650. Photograph taken in 1946. There was a good area of garden with it which can be seen beyond the building but most of it is now fenced off and rented by the people in Church Gate House.
BA78B4 - The old Grammar School, built in 1650 using £100 left by Robert Vesey specifically to build a free grammar school for local boys. This picture was taken in 1946.
BA4699 - This is an etching made in 1821 of the Grammar School in Church View.
BA52C1 - The picture shows repairs being done to the roof of the Old Grammar School in Church View in 1910. Arthur Plaster is the person highest up on the roof and he came from a long line of carpenters. John Tanner is to the right and Alfred Collett to the left. It's not known who the young boy is by the gate into the yard of the school.
BA5B74 - These are bricked in windows of the upper south wall of the library as seen in 1997. The building was built as a grammar school with £100 left by Robert Vesey for that very purpose in the 1600s.
BA63E6 - This window is on the south side of Bampton Library, a building which was built as a grammar school with the £100 left by Robert Vesey. Mr Vesey left the money specifically for this purpose. Photograph taken in 1997.
img028 - The Old Grammar School as seen from a wood bloc print.
img645 - J L Hughes Owen's selected several entries from the Vestry meetings from the period 1859 to 1916 when a Parish Council took over the role of the Vestry. Notes from April 23rd 1897, June 18th 1897, Easter 1900, February 1st 1901, April 17th 1903, April 8th 1904. Topics covered include new bejewelled alter cross to commemorate diamond jubilee of Queen Victoria 1897, charity commissioners presented a scheme for closing down the grammar school (see parish council minutes for reaction), Feb 2nd 1901 special service on day of Queen Victoria's funeral well attended, restoration of the bells completed for £279.9s.6d (1shilling = 5p, 240d to £1, 12d to 1 shilling.) Chimes still to be done at estimated cost of £21.
2015.2.6 img993 - The estate agent Winkworth has pledged to give £500 from the sale of every house it sells in Bampton towards the appeal for funds to repair the roof and first floor of the old Grammar School, which houses the library and hosts exhibitions put on by West Ox Arts members and the Bampton Community Archive.
2015.4.24 Piece of floorboard - While doing work on the lintel upstairs at the Old Grammar School, builder Drew Warren had to remove some floorboards and replace them. He found this floorboard with the writing on. It relates to the relaying of the upstairs floor in 1914. It says "This floor was led by J Rose, F Green, R S Craddock on Bampton Fair Week August 20th & 21st 1914 AD"