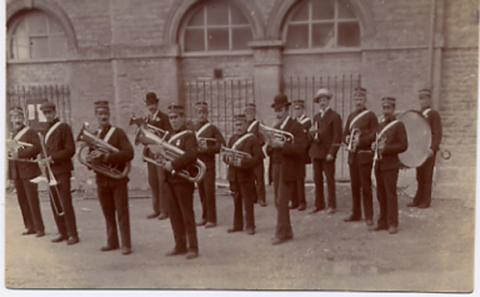 At that time the arches of the Town Hall were bricked up as the space below was no longer used as a market place, rather somewhere for the layabouts to gather.

The second picture of the band in a garden with the gentleman on the left wearing a wide sash was lent to us by Frank Hudson.. Mr Taunt was asked to be the conductor of the band by the players themselves; was the organist at St Mary's in Bampton.

The fourth picture shows the band leading the Foresters out of the church after their annual Foresters' Day service and it was the first time they'd done that.

The fifth picture shows the front cover of a concert program for Dec 17th 1902 and the concert was to raise funds for the band.