On a lovely sunny November day in 2006 a group of Steam Engine enthusiasts stopped off in Bampton, Bridge Street to partake of some refreshment.In 2019 John Wharton told me ..."The steam engines were taking part in the Remembrance Road Run or... 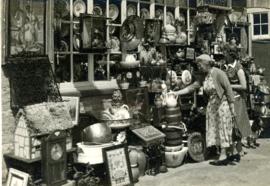 Mr & Mrs Hill ran an antique shop in Bridge Street which was later taken over by their son Arthur. It became a bric-a-brac shop. Many items were put outside on display each week and Arthur was always ready and willing to talk with people. L...

Mrs Frances Money and her husband Percy, a shoemaker

The photograph of Mrs Money was probably taken about c2000.The ones of her husband in his workshop in Bridge Street were taken in the 1960s. Their grandson Andrew Money still lives in Bampton and is a painter and decorator.Percy's daughter i...

Arthur Hill took over the running of the family antique shop from his parents. Over the years it became much more a bric-a-brac shop and requests for anything seen in the window which was not easy to get at was met with 'My executors will ge...

Old newspaper pictures of The Talbot and The Elephant & Castle

This newspaper cutting was found in a book in a second hand book shop. There is nothing to suggest the date but a fire destroyed the thatch on the Elephant & Castle about 1956 so it is earlier than that. It was given a slate roof when it was...

1972 photograph of the Bampton Traditional Morris outside the Horse Shoe with Roy and Francis Shergold, Pete Allam, Cyril Smith and Frank Daniels. Black and white picture of the side outside the Talbot in 1973 with Frank Daniels, Ray Borrett, Fra... 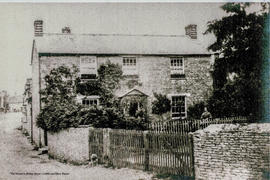 This black and white photograph of Castle View farmhouse was taken about 1880. The lady standing in the garden may be Mary Plaster. The main gateway entrance has been bricked up now and moved farther to the right. The step to the little side ga...

A letter marking the closure of Emmies, our Papershop

In May 2012 our papershop known as Emmies, run by Tom and Silvia Papworth closed for the last time. The letter gives a history of the shop, the people who ran it. It documents not only the passing of the papershop but records the very active par...