This is a view of Broad Street looking to the North.The young trees on the left were a gift for the village from George Gerring. The trees that had been there were in a dangerous state and had been removed.There are gas lights on the left, a rece...

This is Broad Street looking north. The trees on the left were a gift from Mr Gerring who lived in Broad Street. Previously, there had been lime trees along the road but they'd had to be cut down. The council paid to have them planted.On t...

Bus Shelter given to Bampton by the departing Royal Corps of Signals, 1969

This bus shelter was a gift from the departing Royal Corps of Signals in Weald to the town of Bampton September 1969. It was built by Ray Green, Arthur Beckley and Brian Kew.

The Royal Corps of Signals were at their base in Weald from 1943 until September 1969 after which it was RAF Bampton Castle. Before the Weald station was ready to receive them, they were based in a house in Fox Close off New Road in Bampton. Whe... 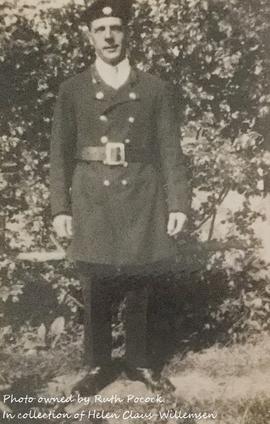 Harry Pocock lived at No2 Broad Street and was the person who went around the farms in Bampton and out as far as a farm in Thrupp by Oxford to thrash the corn on farms before the days of the combine harvester. He was also one of Bampton's re...

Woman has minor head injury after crash in Bamptom

Broad Street looking north. The pub on the right is the Plough Inn. The trees on the left were planted by George Gerring about 1902. There is what looks like a gypsy caravan on the grass and many people giving an idea of the style of dress around ...

Broad Street looking north - the lime trees on the left are quite well grown after being planted about 1902 so the date of this picture is about 1914-1920. The Plough Inn is half way along on the right with a canopy over the door. The ladies feel ...