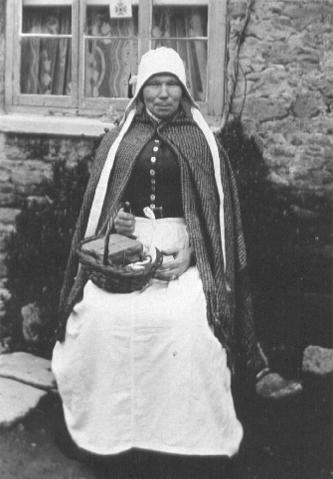 Brooks family in the twentieth century

Mrs Brooks of Mill Green showing a cross in the window to indicate a member of the family is away at war. WWI. She was the mother of Brannon Brooks and mother-in-law to Nellie Brooks who was the mother of Nan, Jim, Connie, Teddy, Bob, Nellie and Brit. Her name was Sarah Loveridge, and Richard (Dick) Brooks was her son. (We think!) Her son Teddy was knocked down by a motorcycle on the bridges in Bridge Street when he was 5 and died in hospital.

Mrs Sollis from The Swan Inn in Buckland Rd and mother of Rose Gerring, Nellie Brooks and Annie Amelia 'Ginger' Smith. The father of Annie Amelia "was the grave digger at Black Bourton Church and, when my Great Auntie Doris (born 1912) was a girl, he used to get her to jump up and down on the earth on top of the coffins to help bed it down! She only told us this in later life as my Gran & Great Gran would have been disgusted!!" quote from Jamie Wheeler. Annie’s parents were Thomas Akers and Emily Martin.

Newspaper clipping. Teddy Brooks, the five year old son of Mr & Mrs G Brooks of New Road was badly hurt by a motorcycle on the bridges in Bridge Street. He received serious injuries to his head and throat and died in hospital.

The Brooks family early in the 20th century. The picture was lent to the Archive to copy by Alice Puttock who was a Brooks before she married.