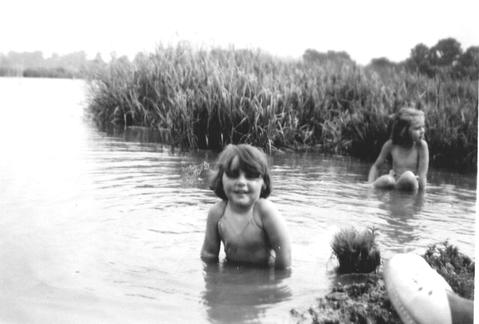 Sisters Janet & Jean Elward are seen swimming in the Thames at Sandy Beach in 1950.

People in Bampton used to swim in streams and rivers in Bampton at one time. Sandy Beach is an area on the Thames a little down river from The Trout Inn along Buckland Road. Just before reaching the Trout, there is a stream called The Isle of Wight brook and to the Faringdon side of the road sluice gates were put across the brook to raise the water level, for agricultural purposes, but it made a really deep area of safe water and good swimmers would go there. They also went to a spot called 'third field' which was three fields down on the left of Buckland Road after passing the last house on the left - it's now the site of the sewerage works and nobody would want to swim there now even if they could get access without trespassing.