The pub in the High Street named The Morris Clown (as at 2018) began life as The George. Steve the present landlord found the ancient wooden name board in the cellar but it fell to dust when he tried to lift it. A long time ago it became the New...

The New Inn in the High Street which was later renamed The Morris Clown in 1973; it started life as The George. Stevens the grocery shop became a shoe snob's shop and then a wet fish, fruit and vegetable shop before becoming a private dwellin...

This picture was taken from the middle of the road outside The Grange looking up towards the Market Square very early in the twentieth century. The present day Morris Clown was then called The New Inn; originally it was The George. 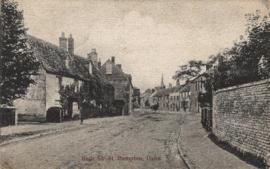 Picture postcard of the High Street looking east from outside the Grange. Addressed to Miss K Phillips in Stanton Harcourt. The New Inn and Pembrey's department store can be see with the steeple of St Mary The Virgin in the background. Th...

Les and Stella King took these photographs of the Shirt Race, about 1970. They are copied from colour slides. Apart from the old cars, note the ladies wearing stockings with seams; Fleur de Lys hairdressers, The New Inn now called The Morris Clo...